Popcorn Ceilings, and What I Learned

on October 24, 2018
Disclaimer: While there are links to the products I used, I do not get paid to post them, but I put the links for the convenience of my readers. 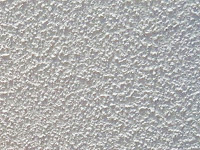 We've all heard of them - and to be honest, we've all seen the Pins floating around on Pinterest about "Easy Ways to Remove Popcorn Ceilings", but actually removing them? It's a whole other ball game.

First and Foremost: If you're going to remove your popcorn ceilings that were before the 1980s (realistically, people say before 1978, but I say before 1980 to be safe), get it checked for asbestos. It's better to be safe than sorry.

I did all kinds of research of how to remove our #PopcornCeilings because they date a house (in my opinion). Some said water and scrap, while others said hire a guy, blah, blah, blah. The common method is to do the water and scrap method, where you wet a section of the ceiling (preferably with a garden sprayer) and then use a large putty knife to scrap the popcorn off, and then repeat until the ceiling is bare. A lot of times, if you don't have patience with scrapping and the putty knife, you'll end up gouging your ceiling... And on the off chance you don't gouge your ceiling, the part they don't tell you about: Skimming. What is skimming? #Skimming is a thin coat of mud that you can use to repair or smooth surfaces, like ceilings. So if you have joints or have to level an area on your ceiling, which most ceilings need it, you will have to skim after your remove the popcorn ceiling, and that takes about 2 to 4 coats of skimming in order to get the correct desired smoothness.

Oh and did I forget, skimming is an art, to an extent.

So now I was on a mission to find a fast way to remove the popcorn ceilings, while not gouging them, and not having to skim the entire ceiling. I found this YouTube video of a guy using a drywall sander in order to remove the popcorn, and it's just magical to watch:  Festool Planex Popcorn Removal 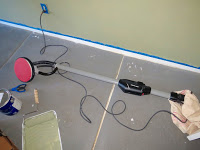 I was sold. I called up my local #HomeDepot and found that they have a drywall sander to rent for $34 for 4 hours (it's the minimum), and I was confident and ready to rock.

... And then I ran into so many problems with my "easy fix": First off, the drywall sander says that it's virtually "dust-free", but the one to rent at Home Depot didn't have the attachment that suctions in the dust in order to make it dust-free so there was a winter wonderland in our master bedroom, and all over me. 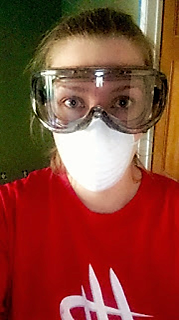 Once I realized that I wasn't going to get this done as fast, let alone, as convenient as I thought I would be able to (I got maybe a 12-inch square done in an hour), I re-evaluated my decision... And talked to my co-worker at the time, who does construction, and we came up with the plan: 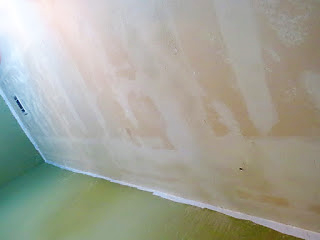 I went back to spray the ceiling with a sprayer and scraping with a putty knife... And boy did it work wonders! Our master bedroom is listed as a 16x13 room and 3 1/2 hours later, I had a beautifully clean FLAT ceiling... And a floor of a putty popcorn mess. #TotallyWorthIt

Honestly folks, I tried every which way to scrape a popcorn ceiling - spray and scrape, drywall sander, and regular dry-scraping - but I promise you, the spray and scrape is the way to go. Plus, it's fun (or at least for me it was) to see giant mounds of popcorn ceiling coming down left and right as you work. Do you see the beauty of the flat ceiling in my picture (and the hot mess I looked like afterwards)?! They just look so beautiful to me (not me. The ceiling)... Here’s my step-by-step process of how I did it:

It’s really that simple and it turns out so beautifully…

… Now let's talk about what's not so beautiful: Not tarping your floors, and especially the walls. Everyone warns you that you should do it, and you should. Want to see why? 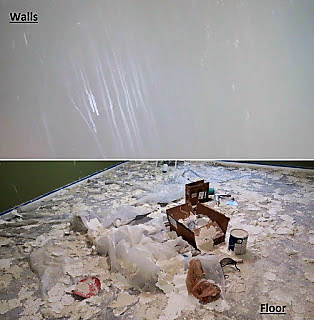 Just tarp... Whatever you do.

Enter my best friend in the whole popcorn ceiling removal process: #Ryobi 1.2 Amp Corded 5.5inch Corner Cat Sander. This guy and I have done more projects than I can count! I mean, if you asked me to count, I could, but you get the point. A lot.
I did my research about sandpaper, which is the higher the grit, the fine the course on the sander. Easy enough to remember… And since I didn’t want to rough up my ceiling, but rather smooth it out, I put on it’s 220 grit sandpaper and went to town… Or so I thought I was going to “go to town”. The 220 was too soft for the ceiling and again, we were back to wasting my time and energy.

I reevaluated – said a little prayer to the reno-Gods – and put a 120-grit on, and it worked perfectly. After some sanding, I had a smooth ceiling that just needed a little sweeping to get off the excess dust, and then it was ready for it’s paint.

Anyway, the next thing to do on my list of renovations is staining leather chairs. Yes. It is possible ladies and gentlemen.