on December 05, 2018
Disclaimer: While there are links to the products I used, I do not get paid to post them, but I put the links for the convenience of my readers.
Extra Disclaimer: Some of the pictures that I used are not my own, and if they aren't my own, I put the link to the source that I found them at below the picture. 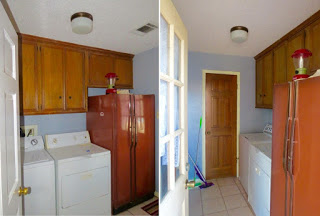 When we bought our house, there were certain projects that we knew needed to be done prior to moving in: painting the bedroom, removing popcorn ceiling in the bedroom, new carpet in the bedroom (it had zero carpet upon buying), etc. Nevertheless, while when we looked at our laundry room, we - and by "we", I totally mean me - knew that it needed an update - remove all of the cabinets in there, put open shelving, in order to open up the room, along with eventually installing pocket doors in order to free up some space that the doors were clearly taking up. However, all of that was one of those tasks "for later" type of dreams... Until we moved in. I forgot that my mom had given us a beast of a #MayTag dryer:

Truly, it's a thing of beauty... Big beauty, but beauty nonetheless. So since you can obviously see that it's a double-dryer, our plans to wait on renovating the laundry room got pushed up on our timeline quite fast, since we couldn't move our dryer in, without removing the built-in wall cabinets, which means, no drying of clothes.

We (again me) immediately started researching our built-in cabinets to determine how to remove them in the best way possible. After some research, we did determine that the cabinet were indeed built-ins and not builder cabinet, because if they were builder cabinets, they would've been so much easier to remove off the wall (and less damaging). So what did I do? I called Vinny... Immediately. 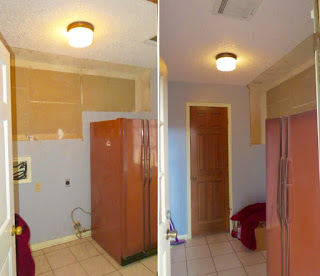 He came over and removed the cabinets, while Nick and I worked on painting our bedroom ceiling so it would be finished in time for our carpet arrival (which means we could finally move in). After an hour or so, I came back and they were all gone, along with some rather large holes in the walls. However, I always trust Vinny, because Vinny always has a plan.

He patched the walls the next day with some putty and tape, and while it looked a little Frankenstein-ish, it did the trick. So I went to work on removing the popcorn ceiling in the room (all the popcorn ceiling will eventually be gone out of my house, one room at a time) in order to help prepare for the eventually painting of the walls and ceiling. 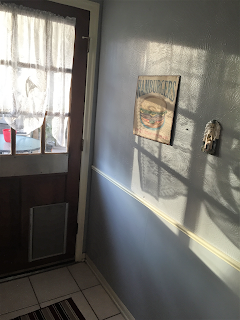 Not bad huh? The wall color that we choose was Benjamin Moore's Glass Slipper 1632, but again, we used Sherwin Williams color-match in order to use their paint. It was a great debate between Glass Slipper and SherwinWilliams' Sea Salt 6204, but what won Glass Slipper out in the end was that Nick actually had an opinion on it. Glass Slipper was a little more of a hint of light blue, while Sea Salt was of more greenish-gray undertone, even though the picture does the color no justice... Nick based his opinion on the names. Don't ask. 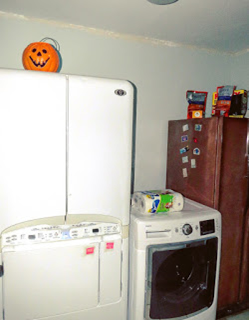 And as you can see in the picture, it's a little crowded in there, but to be honest, it's the best we could do with our space and appliances... Plus, cleaning up all the mess on top of all the appliances will help too (like my pumpkin?). In an ideal world, we would expand our laundry length-wise to give us a little more space and breathing room, but we ain't made of money folks.

Anyway, this is what we have for now, which will do. However, we just recently bought cabinet to make the mega-dryer look built-in, and then we're replacing the refrigerator with a large floor-to-ceiling pantry to house all of our cleaning surprise *squeals in excitement* Those should be happening by the end of this month, so obviously, I'll keep you updated when that happens.

The other thing I'm struggling with, is after living with the Glass Slipper color, I really think I want to change it to more of a yellow color, but Nick is against yellow coloring... Can I just paint it and claim I don't know what happened? Is that an option? I know I need to either paint it now, or forever hold my peace with Glass Slipper, because once those cabinets are in, no painting.

Until next time, where I'm going to show yall how I painted a vintage dresser... And how I did unnecessary work that you should avoid.
Sarah
#MeAndVinny