Where To Even Begin?

on December 12, 2018
Disclaimer: While there are links to the products I used, I do not get paid to post them, but I put the links for the convenience of my readers.

I've been terrible about updating my "Minimal Lifestyle" side of my blog, just because I wasn't sure the reaction to this specific post... I wanted to write about what my first step was towards minimal waste, but the honest truth is, it started with menstrual cups, and for a lot of people out there, no one wants to talk about them. However, when I'm asked "Where did you begin when you started your journey?" this is where I began.

It's the most daunting question to ask yourself when you want to make a big change in your life, whether it's to start eating healthier, changing careers, moving cities, anything and everything. It can almost be crippling to think of all the different avenues you can possibly take to achieve the same goal. But there's hope. That hope comes in the form of my sister's favorite phrase (check out her amazing health blog here): 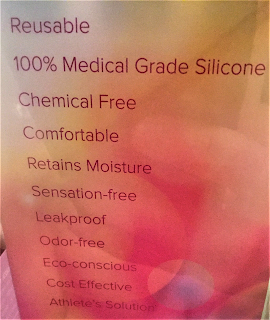 So what was my one simple change? The silicone #MenstrualCup.

But before you say "ew" (as one of my best friends still does), think about it from the perspective of how I started my minimal waste journey: how to save money. 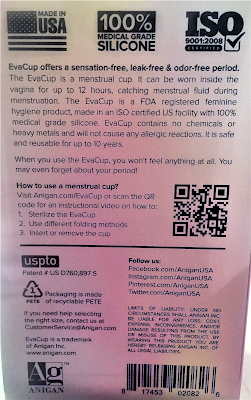 The menstrual cup that I got initially was the Anigan EvaCup at $24.95, which is just shy of the box of tampons that only lasts you half a year, so in one year, you've already saved between $10-19, which may not seem like a lot, but that will add up fast. The average age for getting your period is 12.5 years old, and the average age for starting menopause is 51 years old. So that's roughly 39 years of paying for tampon, now figure in those yearly prices from before, and you're looking at spending roughly around $1,365 - $1,715!

However, let's look at the monetary value in terms of switch to a menstrual cup. According to a lot of sources that I read online, you should replace your menstrual cup between 2-4 years (some claiming you can go as long as 10 years, depending on how good you are at cleaning it). So let's say replacing it every 3 years, that means that an EvaCup will cost someone $325 over their period-span, which is a savings of around $1,040 - $1,390. 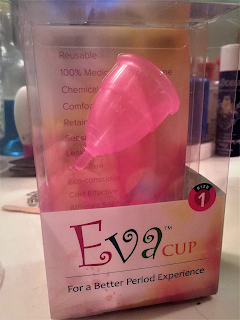 Now the real question since I've sold you on the pricing: How does it work, and how does it hold up over time?

I've been using my menstrual cup for 3 years - shockingly, while slight discoloration, which is normal over time, it's holding up just fine - and while it does take a little getting used to, it's not complicated. Actually, the instructions are pretty straight forward, and as long as you follow them, you'll be fine. Seriously. Once you try it - and I mean, really try it, not like a one-period-cycle-try, but give it a solid 2-3 times - I'm sure you'll love it, or at least, like it better than tampons.

Here's the different parts (I don't want to call it a "con", because it's not a con, but it is the part that takes getting used to): 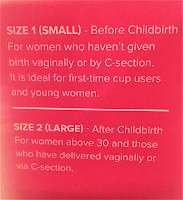 I do want to talk about the sizing because being where I'm at in life, it's a little confusing for me: I'm 31-years-old, so that's a Size 2, but I haven't have children, so that's a Size 1. See? Confused. For me, personally, I went with a Size 1, because the instruction say that if your cup is "slipping" you either need to do more kegels, or go up in a size, so I thought trial and error was my best bet, and also, I thought childbirth probably was the major factor in sizing, rather than age. Honestly? The Size 1 works perfect for me. No "slipping". No discomfort. However, I understand everyone's lady bits are different, so if you're like me and in between the sizes, my theory is start small, and go bigger if you need to. 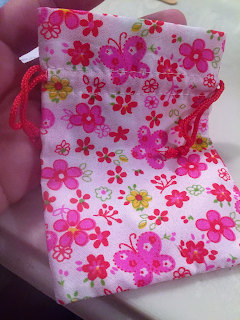 So to wrap this up, and like I said in my disclaimer at the top, I do not get paid to review the EvaCup, it just happened to be the one I choose and is available at my local grocery store, so it's a convenience thing for me. Here are some other different types of menstrual cups to choose between:

Hopefully this post didn't freak you out too much, but actually gave you a better choice for your ladies bits. Besides, it all comes in this adorable little cotton bag, so it's not all bad, right?

Either way, in my next post, I'll explain another way to do #OneSimpleChange that helped me start seeing the world a little differently, especially the amount of unnecessarily disposable items we kept purchasing.