on January 03, 2019
Disclaimer: While there are links to the products I used, I do not get paid to post them, but I put the links for the convenience of my readers.
Shoot... I did it again... First I didn't update on time due to a sinus infection, and then I forgot to bring my camera to upload my photos for this post, so a day late. My bad.

Anyway, when Nick and I first started living together, four and half years ago, he had been given a dresser by his roommate/best friend. It was actually a super unique and great #dresser, just ended up being the wrong color once we got new bedroom furniture: it was an oak-color, while our bedroom was a black-brown colored wood set (thanks #Ikea). In addition, it sat directly on the ground, which - personally - I'm not a fan of furniture that sits directly on the ground, especially on carpet; I like my furniture up on legs to help the room feel airy and light.

So the obvious answer to me was to sand it, stain it the right color, and then add legs to it... Duh.

I went out and got all my tools for getting the project done:
Total: $101.11
(Your polyurethane will determine how shiny your furniture is)

I started sanding immediately, and after a good amount of work? It was particle board underneath. Seriously?! Ugh. New plan... Well, actually, not really. I decided to stick with the same plan as before, but I became increasingly worried about how I was going to do the drawers.

But I'd worry about them later, I guess.

After everything was sanded, I followed the instructions by putting a layer of the Pre-Stain Wood Conditioner on, waiting 15 minutes, and using a cloth to wipe off any extras.

Mind yall, since I was doing this out in the Houston heat on my driveway, there was no "extras" really, because it dried that fast. I then began using the stain pad to wipe on the ebony stain, which after the first layer, was a weak excuse for "stained wood", but again, working with particle board here.

After some research, I figured that the stain wasn't having enough time to sink in. So I did one good layer on the board and then let it sit for 2 hours. This time? Total success. 3 coats later, with a 2-hour dry
time in between each coat, it was beautiful and a rich black color to match our bedroom. Moreover, when I was doing the wiping on the top, it gave off a faint stripe design to it, so it ended up helping the overall look of the dresser by giving it more of a "natural wood feel", rather than the flat particle board that it was.

The next and final step was the polyurethane sealant... I followed the instructions perfectly, but after the first coat, the dresser was super shiny - like modern furniture shiny, which is not the look weren't going for at all. I mean, not even remotely close to what we were going for here.

I figured this happened due to the dresser being particle board, but to be honest? I had no idea. I was more telling myself that to feel better, since it wasn't what I was hoping for... Since polyurethane's finish clearly determines the shininess (get it? Clearly? The polyurethane is clear? Nevermind) I opted to find a matte topcoat, which I found one at #HomeDepot except that it was made for #ChalkPaint but I thought, eh, why not? I can always sand it if I don't like it, which is what I had to do to remove the polyurethane anyway.

I sanded the polyurethane off, re-stained the dresser to make sure it was a consistent coat on the dresser, and then painted the chalk matte topcoat on, and it actually turned out amazing! Now I don't know if you can mix stain with a "topcoat", but mine worked out really well. Now, I do stand by that a good #polyurethane is the superior choice for furniture that's going to get a lot of use on it, but our dresser is going to have pictures on top of it, and that's it - so not a lot of wear and tear, which means, I think I'll be fine with the topcoat.

Word of Advice: If you stain a dresser, make sure to put polyurethane or topcoat, or whatever your sealant is, on the bottom edges of the dresser too because when Nick and I lifted the dresser, we got stain all over our hands because it still hadn't been sealed on the bottom.

Moving on, so now that the shell of the dresser was completely stained properly, it was time to focus on lifting that sucker up in the air a bit. I was going to remove the "feet" that were already on the bottom of the dresser, but they were wood-glued on (that was also my plan with adding the new feet, so extra confidence boost that I was in the right direction). I fastened four 2-inch blocks of wood to the feet that I had bought on #eBay by drilling out holes into the blocks and then using a rubber mallet to hammer in the standard 5/16" tee nut. Then I used wood glue to fasten the legs to the bottom of the dresser.

So now that the dresser shell was all finished, it was on to the drawers... So I guess it's time to worry about them now, huh? The drawers has so many nooks and crannies that I started to get overwhelmed with my project. The outside was black now, while the drawers were oak, so there was no going back - Trust me. I tried to justify leaving the oak drawers with the black body, but Nick wouldn't let me.

I sat on my dresser for a week or two, researching everything I could, and finally, one of my friends (Hey Brooke!) suggested Milk Paint (yes, I know I'm late to the milk paint party). I did my research, and it seemed to fit everything I needed, so I went for it... because it was my only option, really.

I purchased General Finishes Lamp Black Milk Paint from Amazon for $34.34, and got to work on the drawer... and guess what?

It worked! Check it out: 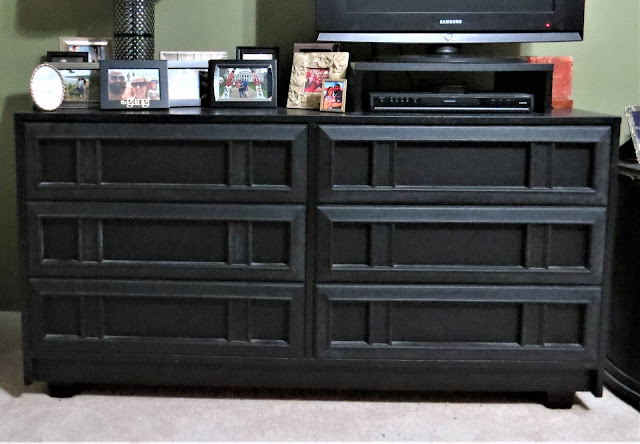 
After writing this post, and knowing what I know now, honestly, I could've done this project for a lot cheaper:

That ladies and gentlemen is a #CaptainHindsightMoment. Lesson learned: yes, do your research, but don't do your research so intensely that you get talked into doing things that aren't necessary because you're scared.


My next post is actually going to get back to house remodeling, with an update about the kitchen remodel progress. Hip hip horray!