The next step in our #remodeling process was to remove all of the #cabinets from the #kitchen - and when I say all, I mean all, except the kitchen sink. Literally, we left the kitchen sink cabinet, and the dishwasher, and that was it.

I didn't want to be without a sink and dishwasher for months.

Instead of jumping right into the remodeling, I'm actually going to discuss why we left the kitchen #sink and #dishwasher, besides the obvious reasons: When I asked my wonderful sister-in-law about her kitchen remodeling process, which she did with Vinny as well, I asked her for advice, naturally... She didn't have one catchy phrase to give me, but more the story of washing her dishes in the bathtub for months was a pain, was enough for me to take notice.

See, our master bathroom has a tub, but it's old. And liked to clog. So that would leave me going up and down the stairs to our second floor bathroom tub, and ain't nobody got time for that.

Nick's suggestion was to use paper plates, as did other family members, but again, I'm trying to do #MinimalWaste, so paper plates are out - because, let me blow your mind for a second: before you say "Well Sarah, they're paper plates, they can be recycled", most things that are paper (or cardboard) that have some into contact with grease - like a pizza box - cannot be recycled afterwards. So while you're telling yourself that you're recycling by putting that pizza box in the recycling bin, it's just going to the recycling center, being sorted out and tossed into a landfill bin, and taken there instead.

Anyway, no paper plates, thus keeping the kitchen sink and dishwasher until the last minute... and I'll tell you, it actually worked out quite nicely for us.

However, back to the cabinet removal. 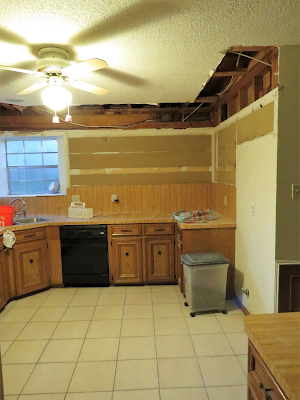 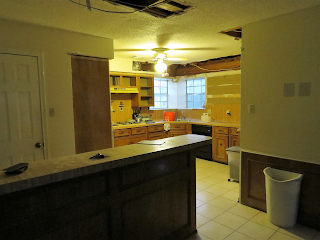 Like I said in my previous post here, once we knew where our duct work was and where it was going, it was a little easier to remove the furr downs around our kitchen. Plus, we did it with confidence too. With the furr downs gone, the first thing that we did (besides take everything out of the cabinets) was to remove the wall cabinets first, along with the doors to the base cabinets. 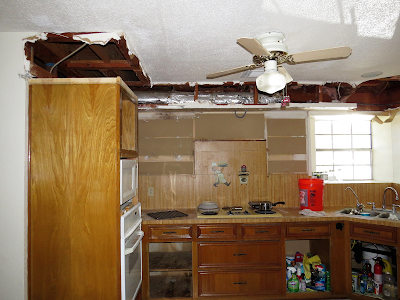 It was a mess... and it was fast. The furr downs and wall cabinets came down in about a day. I'll be honest, Vinny took out the cabinets for us, while we were at work, which was such a blessing. Seriously. I cannot sing this man's praises enough. So while I didn't see how he took down the wall cabinets, he did let me watch how he took out the base cabinets, for the most part. 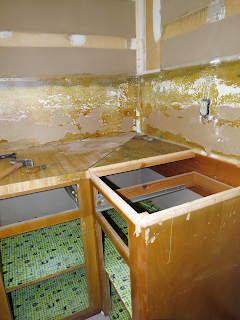 Since our counter tops were #linoleum, they snapped off in big pieces as we pulled them up, but to be honest? It made it easier on us. Also with linoleum, it peels pretty easily once you can get your hands situated on a piece, thus the walls in that picture (that's not mold, but rather the linoleum glue).

We then started removing drawers from the base cabinets as we went to try to help with the clutter/mess of taking everything out of one room, and placing it somewhere else inside our house. This idea of removing as we went helped because obviously, with our one-man-wrecking-crew of Vinny, he couldn't get everything done in a day, so not having to move things immediately, helped with not feel overwhelmed with the super messy house.

The next step was actually removing the base cabinets themselves from the floor.

Yall. This idea terrified me. I don't know why - and I can't really explain it, but the idea of removing cabinets from floors was uncharted territory for me.

Shoot. This whole process was uncharted territory, but the cabinets being removed from flooring. Scared. The. Bejesus. Out. Of. Me.

"Stick a crowbar in the top and yank". 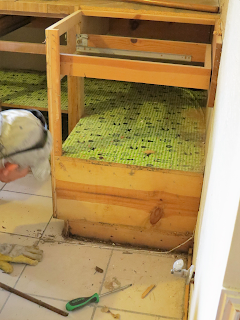 Pop went the side, and we were on our way again.

The one thing that I never understood when I first started this project with Vinny was that he always - and I mean always - tries to save the wood, just in case we can repurpose it, and the funny thing is? He's right.

Yall. If you can salvage the wood by being a tad bit more conscious of your demolition by not "wreck-it-ralphing" everything, it can really save you money in the long run.

Nick and I are currently reusing salvaged wood from our kitchen remodel to build a little side table for the dog's food and water bowl (I'll show yall that later).


Like I said, it can't all be done in a day, but we got the right side of the base cabinets removed, and then cleaned up, so Vinny could start it all over again the next day.