on December 19, 2018
Disclaimer: Some of the pictures that I used are not my own, and if they aren't my own, I put the link to the source that I found them at below the picture.
When the hubs and I bought our house back in 2016, we - and by we, I mean me and Vinny, and Nick just going "sure" - had big plans for remodeling our home. It was a 1977 with great bones, but as our neighbor informed us, we were the only house on the block that had never been remodeled, and it showed pretty hard in certain aspects of the house. So Nick and I sat down, and immediately made a priority list of things that needed updating as soon as possible:

So we updated the master bedroom before we moved in, which you can see in this post, and we painted the guest room next, which you can see in this post, so that meant the next "to do" was get an all new #kitchen, because our kitchen looked like this:
Don't get me wrong, it was functional - two years of functioning in it - but it definitely had way more potential than what it was. Once we saved up our money enough to feel comfortable with moving forward with the kitchen remodel (again, two years of saving for us), we made a list where we wrote down everything we didn't like, and how we envisioned it changing:

1) Take out our giant pantry, because to be honest, I never thought there was such a thing as "too much pantry", but our pantry proved me wrong. It was awkwardly placed. It was not well organized. It just didn't fit;
We not insane and totally going to get rid of a pantry, but more, change it to a floor-to-ceiling pantry similar to this one to the right:

2) We had a peninsula, but we wanted an island;

3) We knew we needed double ovens, since we both like to cook, and after having a single wall oven for two years, it was really clear to us we needed double ovens (I'm a Midwestern girl, so casseroles are my jam). However, Nick and I, personally, both aren't fans of wall ovens, let alone, double wall ovens;
This was probably the most difficult choice, because since we both aren't fans of wall ovens, but we know we wanted double ovens, that automatically put us into looking at professional grade ranges, which are quite expensive, so we knew that was going to be a lot of our budget right there, but man are they pretty;

4) There was never a refrigerator in the kitchen when we moved in, because they took theirs with them, but they left the spare refrigerator in the laundry room, so we weren't without hope (you can see it in this post - pretty sure it's from the 70s too);
We just wanted it to look built-in, and be french doors... We had more qualifications, but that's for my next post about appliance shopping.

Our list for the kitchen remodel wasn't terribly long, but it was definitely a lot to do. Of course - me being me - I started researching to have a better idea of a kitchen remodel pricing, and here is some information that I found on the inter-webs:
(Information obtained from here) 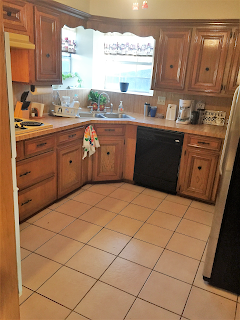 Okay, does the average person really do all those things when their doing a kitchen remodel? Probably not. However, they definitely are doing some: installation, appliances, cabinetry and hardware, counters, walls and ceilings, plumbing and miscellaneous, so that gives 20% ($10,400) going back into that budget scenario. Moving on, because I'll get off topic on our kitchen remodel if we don't...

Where did we begin when we were starting? We had Vinny make a rough layout to make sure we liked the flow of the placement of things, and to be honest, given our current layout, it was pretty obvious to us what our layout would be like... except when it came to where to put the range. Below was our layout before remodeling:

To us, initially, the range would go in that empty space where their refrigerator used to be, but after sitting on it for a couple days, we started to overthink the placement of the range: maybe that wall wouldn't have enough space to house our professional range, so maybe we should move it to where the dishwasher is and move the dishwasher to the other side of the sink, but wait, then we're moving plumbing, plus, we would have our back to everyone while cooking, blah, blah, blah.

Me and Vinny overthought it. However, what was most shocking was that Nick started to overthink it too, which he never does, so of course, I started to really overthink it.

Word of Advice: stick with your gut when you're remodeling.

Several unnecessary headaches later, and much debate, we ended up sticking with our initial gut choice and putting it against the small wall where their refrigerator used to be. With a lot of measuring - and remeasuring - and really considering how to get gas to the range and not change plumbing too much (that costs a lot of money to move plumbing), it just made the most sense.

Below was our initial layout change, and the one we ended up going with in the end anyway: 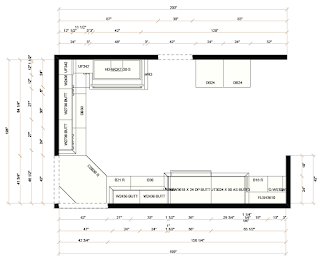 The last thing I wanted to talk about in regards to a kitchen remodel is the #WorkTriangle. I'm sure if you've done any kind of research for a kitchen remodel, you're heard about it. The basic premise is this: In a kitchen, there are three work spaces - I like to call them the "wash" (sink), "food" (refrigerator), and "cook" (range) stations - and no space should be shorter than four feet from another station, or more than nine feet from another station, and the total sum of the triangle shouldn't be more than 26 feet in total.

Now lets take my initial plans and put a triangle on it, so you can see what I'm talking about: 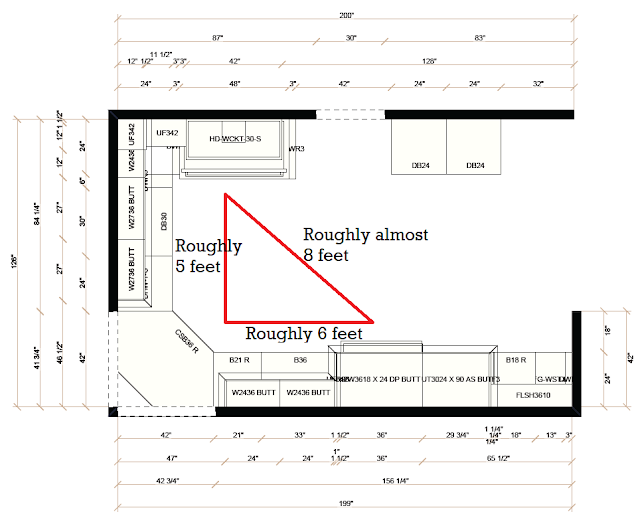 Just under 20 feet in total, so I'd say our little work triangle isn't half bad...

I know this wasn't a whole lot of information, but I've been going back and forth about when to start writing about our kitchen remodel, and how to write about it, but I just decide to write. See what happens and what comes out, so here we are. My first post about the on-going kitchen remodel, and the process that has been going on for about four months - mostly researching during that time, so realistically, only two months of remodeling.

My next post about the remodel will be about our next decision making process, which was deciding on appliances, because while that information above listed cabinetry and hardware as the big-ticket item on kitchen remodeling, without a doubt, appliances was our biggest chunk of our budget (thanks professional range *eye roll* - I'll love you later, I know, but until then, you're just a lot of money out of our pockets, with nothing to show for it).
Sarah
#MeAndVinny
Kitchen